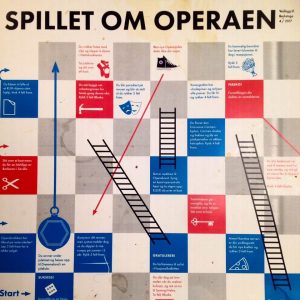 There’s something terribly exciting about a workplace where vikings and gods in leather skirts line up in the lunch queue, Norma greets Onegin in the corridor and one nearly forgets to eat because there’s so many divine boys in ballet pants running in and out to fetch another plate of proteins.

At the table, in the mean time, the conversation is equally mercurial.

“There is no escaping the male gaze; no matter which position you take, it turnes out to be the embodiment of another male cliché.” “In a way we don’t differ that much from the Romans; we also employ slaves, we just call it outsourced labour. And since the resulting poverty isn’t in our country, we can pretend it isn’t there.” “Remember Beyoncé’s Mrs. Carter period? That irritated me terribly!” “The problem is that politics doesn’t really affect the lives of the middle class. They don’t really notice the results. But what Edouard Louis proves is that to people like his parents an income shift of 5 euros made an immense difference.” “The problem with art critique is that the new ‘heros’ are merely those who have the gift to become a mainstream succes, and then, even if they fuck up terrible, the critics cannot criticise them, because their face sells the papers and not the other way around.” “Talent is a dirty world these days, because the neo-liberal dogma states that with persistence everyone can reach everything.” “I usually hike up the mountain with a hammer, so I can break the ice on the lake and swim there.”

Second day, #borealis workshop for young composers #Oslo
If there’s one thing classical musicians aren’t, then it’s out of touch with reality.